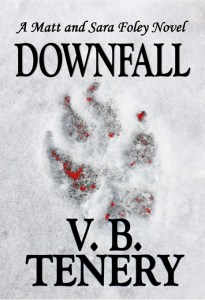 Chief of Police Matt Foley has a new bride and the most complex case of his career.
A prominent couple prepares to retire, when an assassin’s bullets retires them permanently. And he doesn’t stop there.
As the investigation pushes forward, layers of deceit, greed, and bitterness are peeled away, and two families, connected by marriage and murder, face the exposure of their darkest secrets. It’s just another case until Matt finds his wife caught in the killer’s crosshairs.

What Inspired You to Write Your Book?
DOWNFALL is book 3 in a police procedural suspense series. i started the series because its the genre I like to read and I found that most of what was available had more violence and sex content than I like. My goal was to write exciting novels that people like myself would enjoy and find entertaining.

How Did You Come up With Your Characters?
This may sound overly simple, but when I begin a novel I don’t spend a lot of time thinking about developing the characters, they are just there as I write. As I writing a do create a character sheet, (age, height, weight, likes, education, etc.) more for my memory than anything else.

Buy Downfall by V. B. Tenery On Amazon

Read more about the author here.