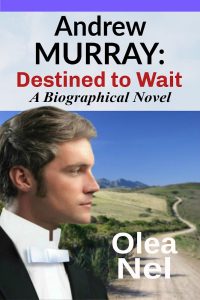 (Bargain book promo)
Hankering to go, but needing to stay
A true story about facing the challenges of Christian leadership in a volatile environment of political intrigue and church secession against the colorful backdrop of South Africa

Twenty-eight year old Andrew Murray has just married Emma Rutherfoord, the girl of his dreams, and is looking forward to resuming his ministry in Bloemfontein with her at his side. But he is barely back in town, when trouble strikes.
The small, land-locked Orange Free State throws up a series of grave situations in which Andrew is called upon to play a central role. They include:

• The attempted take-over of the Orange Free State by Marthinus Pretorius, President of the Transvaal
• The devastation of Beersheba Mission during the Basuto War
• The secession of Psalm-singing (Dopper) members within his own congregation
• Antagonism towards his bilingual education program at Grey College
• The need to acquire Dutch teachers for his farm school project

Added to this is his growing desire to start over again in a new congregation. But although he hankers to go, there are responsibilities forcing him to stay—that is, until God has finished with his training.