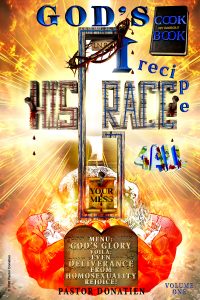 After living a life of homosexuality that began very early in his childhood, Donatien cannot even remember when he started performing it. Upon encountering Christ unexpectedly when he was just past adolescence, Donatien, an ordained minister who previously led the Tobilehibe Ankaramalaza in an outstanding way—the heart of one of the largest revival movements in Madagascar.

What Inspired You to Write Your Book?
To preach the Gospel as Jesus says, "Go ye into all the world, and preach the gospel to every creature. He that believeth and is baptized shall be saved; but he that believeth not shall be damned." Mark 16:15-16 (KJV).

Book Sample
Pastor Donatien, ThM., a former SE.MI.PI. (a cadet in the Malagasy Army), a one-time Ankaramalaza middle school teacher, a notable former pastor's assistant, and a charismatic, successful former senior pastor of Ankaramalaza–the center of one of Madagascar's four major revival movements which was founded in 1941 by Christ Jesus through His servant, Prophetess Mama Volahavana Germaine, also known as Mama Nenilava, his wife's grandmother. The prophetess's ministry, during the ministry's annual celebration, attracts over twenty thousand attendants from all over Madagascar and some from abroad–who are mostly Christians but some are non-Christians.

Married in 1987, he and his lovely wife, Claire, have one precious granddaughter and five wonderful grown children–a daughter and four sons, her younger brothers.

Through divine experiences, the outpouring of the Spirit of the Living God, and the speaking in tongues marvel, the Lord Jesus guided the anointed and fiery preacher to write this series for the world–to help the living and the future generations as the end of time and its undeniable global challenges and apocalyptic plights are fast approaching us. Pastor Donatien, after spending more than a quarter of a century of preparation, of which over five of those years he spent day and night, seven days a week, 365 days a year doing nothing else but solely writing during which their three noble, amazing, younger sons completely assisted him in whatever the undeserved divine task may require and, also, having his dear wife's full support, finally, he finished penning down GOD'S COOK BOOK – 1 recipe 4 ALL – YOUR MESS + HIS GRACE – MENU: GOD'S GLORY – VOILÀ EVEN DELIVERANCE FROM HOMOSEXUALITY – REJOICE!

All glories, honors, powers, praises, and thanks be unto the Living, Mighty, Holy, and loving Father Lord God, His one and only Son, and the Holy Spirit alone.

This book is the first volume of GOD'S COOK BOOK series, which some people may say is unorthodox since even the series' title voices random terms. Surprisingly, long ago, some folks asked, "Can there any good thing come out of Nazareth? (John 1:46). But then, around that same time, to reply to a certain individual, the Lord Jesus expressed, "Come and see" (John 1:39). One may be wondering, therefore, about what it is that makes this series so unusual? Which is utterly understandable! Well, to borrow that expression from Christ our Lord and Savior, another person may say, "Come and see!" or "Read and see!"