You are here: Home / Fiction / One Thursday Morning by T.K. Chapin 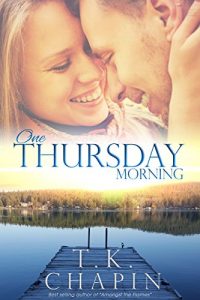 Running not only for her own life, but that of her unborn baby, Serenah moves across the country to a little town outside of Spokane Washington called Newport. It’s here she’ll begin to build a new life and go by a different name in the hopes of staying hidden from her abusive husband John. Can Serenah find happiness in her new life? Or will the past eventually catch up to her? From the best-selling Inspirational Christian Romance Author T.K. Chapin comes a story of love, faith and passion that will keep your fingers turning the page to see what happens next. One Thursday Morning is book one in the Diamond Lake Series by T.K. Chapin.

What Inspired You to Write Your Book?
God inspired me. He gets all the credit and without him this story and the ones after it in the series wouldn't be possible. The setting for this book came to my mind after visiting my aunt's inn on Diamond Lake in Washington. I include pictures of the actual inn on my site.

How Did You Come up With Your Characters?
Almost all of the characters in my books are modeled after people I know or have met in my life. For example, in this book Emma is modeled after my grandmother, she was always willing to listen and give spiritual advice.

Book Sample
Prologue
To love and be loved—it was all I ever wanted. Nobody could ever convince me John was a bad man. He made me feel loved when I did not know what love was. I was his and he was mine. It was perfect . . . or at least, I thought it was.
I cannot pinpoint why everything changed in our lives, but it did—and for the worst. My protector, my savior, and my whole world came crashing down like a heavy spring downpour. The first time he struck me, I remember thinking it was just an accident. He had been drinking earlier in the day with his friends and came stumbling home late that night. The lights were low throughout the house because I had already gone to bed. I remember hearing the car pull up outside in the driveway. Leaping to my feet, I came rushing downstairs and through the kitchen to greet him. He swung, which I thought at the time was because I startled him, and the back side of his hand caught my cheek.
I should have known it wasn’t an accident.
The second time was no accident at all, and I knew it. After a heavy night of drinking the night his father died, he came to the study where I was reading. Like a hunter looking for his prey, he came up behind me to the couch. Grabbing the back of my head and digging his fingers into my hair, he kinked my neck over the couch and asked me why I hadn’t been faithful to him. I had no idea what he was talking about, so out of sheer fear, I began to cry. John took that as a sign of guilt and backhanded me across the face. It was hard enough to leave a bruise the following day. I stayed with him anyway. I’d put a little extra makeup on around my eyes or anywhere else when marks were left. I didn’t stay because I was stupid, but because I loved him. I kept telling myself that our love could get us through this. The night of his father’s death, I blamed his outburst on the loss of his father. It was too much for him to handle, and he was just letting out steam. I swore to love him through the good times and the bad. This was just one of the bad times.
Each time he’d hit me, I’d come up with a reason or excuse for the behavior. There was always a reason, at least in my mind, as to why John hit me. Then one time, after a really bad injury, I sought help from my mother before she passed away. The closest thing to a saint on earth, she dealt with my father’s abuse for decades before he died. She was a devout Christian, but a warped idea of love plagued my mother her entire life. She told me, ‘What therefore God hath joined together, let not man put asunder.’ That one piece of advice she gave me months before passing made me suffer through a marriage with John for another five trying years.
Each day with John as a husband was a day full of prayer. I would pray for him not to drink, and sometimes, he didn’t—those were the days I felt God had listened to my pleas. On the days he came home drunk and swinging, I felt alone, like God had left me to die by my husband’s hands. Fear was a cornerstone of our relationship, in my eyes, and I hated it. As the years piled onto one another, I began to deal with two entirely different people when it came to John. There was the John who would give me everything I need in life and bring flowers home on the days he was sober, and then there was John, the drunk, who would bring insults and injury instead of flowers.
I knew something needed to desperately change in my life, but I didn’t have the courage. Then one day, it all changed when two little pink lines told me to run and never look back.

Buy One Thursday Morning On Amazon