You are here: Home / Fiction / Shadow of Hope by J.B. Hawker 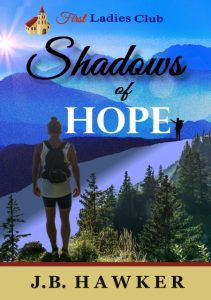 Hope, an ex-Marine fitness instructor, is recently married to a small town minister. Usually self-reliant and self assured, she finds adjusting to the role of first Lady of her husband’s church more daunting than expected. A disastrous camping trip with the church youth leads to even more challenges when a couple of dangerous drug dealers mistakenly think Hope has stolen from them.. adding to her troubles, a wayward teen turns to Hope for rescue from her sad life in the foster care system. Will Hope be able to lean on God and her church family or will she continue to rely on her own strength?

What Inspired You to Write Your Book?
The character of Hope first appeared in my book, "Mrs. Thistlethwaite and the Magpie" in a minor role. When she later married the pastor of a church in small town Bannoch, Oregon, where my my First Ladies Club series is set, it seemed natural to focus the next book in the series around Hope.

How Did You Come up With Your Characters?
I spent more than twenty-five years as a pastor's wife and a leader in women's ministries. The characters in my books tend to be drawn from my life, while the "bad guys" are figments of my imagination. Several of the characters in this book sprang to life in my previous books. My three series, The Bunny Elder books, the First Ladies Club series, and the Mrs. Thistlethwaite (Tillamook Tillie) books all take place in the same fictional universe and sometimes move freely among the series.

Book Sample
Hope sensed a menacing form approaching her from behind a nearby concrete pillar. She shifted her weight, her muscles tense. Running away was no longer an option as the hooded figure rushed toward her with arms outstretched. Dim light from a narrow basement window glinted on a knife as it slashed through the air.
The tall, fit, auburn-haired young woman grabbed her assailant’s wrist, bending his arm back until the knife clattered to the floor. Using her attacker’s momentum, she rolled him over her hip, sending him crashing at her feet, winded. Snatching up the knife, she dropped her knee onto the man’s neck, holding the blade under his chin.
A round of applause broke the mood and Hope hopped up, holding out her hand to help the now smiling man get to his feet.
“That was wonderful, Hope!” Gwennie cried out.
The other students, mostly middle-aged women dressed in workout gear, chorused in agreement.
“Are you okay, Dan?” Hope asked her erstwhile assailant. “I wasn’t too hard on you, was I?”
“No more than usual,” Dan said with a crooked grin. “But getting beaten up by a girl all the time isn’t doing my male ego any favors.”
“You’ll get over it,” Hope teased, walking back to the front of the room to address her self-defense class.
“Let’s give Dan another big round of applause to thank him for helping out with the demonstration, ladies,” she announced, gesturing to Dan who gave a mock bow before going up the stairs.
More than one of the ladies followed his muscular form with their eyes, a few blushing when he turned at the top of the stairs and waved.
“Now, let’s pair up and walk through the moves you just observed,” Hope said with a grin.
Hope taught self-defense classes in the basement fellowship hall of the Nazarene Church in this charming seaside community. As a retired Marine, she was well-qualified to help others get fit and learn to protect themselves.
This particular group of women had been learning together for a few years now, ever since Hope abandoned her nomadic lifestyle to make Bannoch her home. She never expected her life to change so much when she’d decided to move to this small Oregon town.
She’d been drifting after leaving the military until she ran into a serial killer who’d tried to add her to his list of victims. Although injured, she’d managed to escape his clutches.
When she was discharged from the hospital, Hope needed to recuperate from her narrow escape. She’d wanted a change; something to erase the memory of her brush with evil. She’d decided a hefty dose of salt air would be the perfect antidote for what she’d been through.
When Hope stepped off the bus in this beachfront village, she felt the ocean breeze cool her battered body, heard the roar of the surf, and was soon enchanted with the town’s slow pace and friendly inhabitants.
Settling in and starting her classes, she had found not only a new home, new friends, and a new faith, but, much to her surprise, she’d fallen in love, as well.
Her recent marriage to the Reverend Doctor Gideon Hopkins of Bannoch’s Mount Zion Tabernacle had changed her last name, but she continued teaching her fitness classes and had yet to become comfortable in her unfamiliar role as ‘first lady’ of Gideon’s predominantly Afro-American congregation.
Hope wandered around the room checking on her class members’ progress. Gwennie Barthlett, wife of the Nazarene pastor, looked up from the exercise mat where she’d been flung by a sweet little old retired librarian, and called Hope over.
“Will you be at next week’s First Ladies Club meeting?” Gwennie asked, struggling to raise her bulky form off the mat. “You’ve been a pastor’s wife for almost three months, now, and everyone is eager to welcome you to our group.”
“I’ve been meaning to come. I’ve just been so busy. Moving and all, you know how it is,” Hope said.
“Oh, I know,” Gwennie said while grabbing the librarian and throwing her over one hip.
“Adjusting to becoming a pastor’s wife can be hard,” she continued, pinning the smaller woman to the mat. “That’s why we started the First Ladies Club to support one another. Here in Bannoch, no matter what denomination we serve, we are sisters in God’s service. Don’t think of our meetings as another dreaded task, please. The club has been a life-saver, more than once, believe me!”
“I’ll try to be there next week,” Hope promised. “Now, stop kneeling on Doris and help her up. I think you two have the moves down.”
Hope walked across the room, irritated with herself. Why was she so reluctant to join the other preachers’ wives? She’d never been shy before, but for some reason the thought of all those experienced women intimidated her. Giving herself a mental shake, she brought her thoughts back to her class.

Buy Shadow of Hope On Amazon