You are here: Home / Fiction / The Falling Away by Cliff Ball 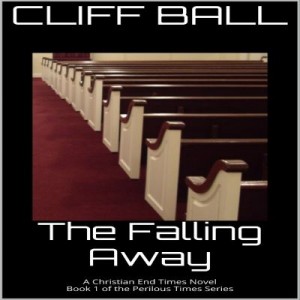 The first novel of the end times series, Perilous Times.

Meanwhile, a race war might be bubbling up in the United States and an altered form of the Ebola virus spreads across the globe, with the powers-that-be blaming Christians for all of it. Doctor Kirkland finds out the real story behind the Ebola virus and decides to do something about it. However, Christians are being hunted down and killed, will Kirkland be able to let the world know what’s really happening?

Targeted Age Group:: Anyone over 13

What Inspired You to Write Your Book?
This is my second end times series and I thought I could do an even better job than the first. What originally inspired me was that I might be able to do a better job than a watered down version of what Left Behind did.

How Did You Come up With Your Characters?
A little bit of it is inspired by what my dad went through when he had double bypass surgery and the resulting effects of that shortly after Obamacare went into effect. So the doctor in the story is stuck in a job he now hates because of government oversight of the health profession. The

Book Sample
“Okay, now the next items on our list are incoming patients. The first patient is a man named Will Carson, age seventy-five. According to the paperwork, he came down with a severe case of pneumonia after a double bypass and had to go on a ventilator because he was getting too weak to breathe on his own. The small-town hospital who had him previously thinks he doesn’t have much longer to live, so they sent him to our ICU. As with other cases like these, we’ll make him as comfortable as we can, but we’ll not go above and beyond. Are we in agreement, Doctor Kirkland?” asked Gina Dodd, the government overseer for this hospital.

Doctor Neal Kirkland spent another moment wishing he had retired when the federal government took over the healthcare system over a decade ago, but he liked the money he made and didn’t want to give it up. He continued to wonder if other government overseers at other hospitals were as cold and black-hearted as Dodd was towards dying patients. When she was lit a certain way, she sort of reminded him of the wicked witch in the old Disney cartoon Snow White. Kirkland thought that for a forty-five year old, she looked decades older than she was, and looked used up, probably from all the nicotine and alcohol she’d consumed over the years.

As for himself, although he was a little older than Dodd, many people assumed he was in his late twenties to mid-thirties, which was both an insult and compliment depending on his mood at the time. He figured that he didn’t look his age because it was either from his good genetics or because he was a teetotaler. Not that it mattered all that much to him. His job was now his life since his wife died a few years ago and his adult children were scattered across the country living their lives.

Buy The Falling Away On Amazon