You are here: Home / Romance / When Heart’s Collide by Sophie Mays 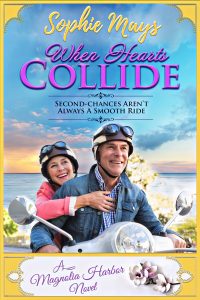 An Inspirational Romance About Having Faith in Second-Chances

Angelica was done with love…until it decided to run straight into her.

After losing her husband six years ago, Angelica has finally begun to get a grasp on this next phase of her life: looking after her granddaughter, spending time with her adult children, attending her church group, and wielding a mean gingerbread cake pan in the kitchen.

Until one day, a wrench is thrown into the gears of her already busy life…

When Dylan realizes that he’s hit someone’s car in the parking lot, he does all he can to right the situation. Lending his car to the unexpectedly fiery Angelica Bennett is the least he can do. As extenuating circumstances lead the two to spend more and more time together, feelings begin to blossom.

Or so Angelica thinks.

Just as Angelica cautions to think there may be a chance at love out there for her again, she’s blindsided by the arrival of an unexpected acquaintance. Will Angelica be given a second chance at happiness? And can Dylan make a difficult decision in order to come to terms with the true needs of his heart?

Join in as Angelica, Dylan, and a lovely supporting cast find their way to learning about real faith, what it means to be a family, and freeing one’s heart…
……
If you like heartwarming, sweet, and uplifting small town romances, then you’ll love Sophie Mays’ beloved Magnolia Harbor.

What Inspired You to Write Your Book?
We were eating at a restaurant when my lovely mother-in-law's car was accidentally hit by a stranger. The very nice gentleman came in to find the person whose car he had hit and I thought, "Hmmm, what if…" (She's a widow and I know that one day she will get another chance at experiencing great love. In the meantime, I wrote her this inspiring story.)

How Did You Come up With Your Characters?
The main character was based very loosely around some of my older women friends who happen to be widows. The other characters just evolved as the story did.

Book Sample
Angelica parked her car and hurried to the right of the church building where the prayer ministry group usually met. She made her way towards the large hall that lay between the cafeteria and the meeting rooms, wishing she could stop and get herself a cup of coffee and a sandwich. She felt flustered and on edge. It had been another in a series of busy days because she had to babysit her son’s three-month-old daughter, and then pick up her younger daughter from work since Ashley had sent her car in for servicing. On top of that, she had recently undertaken her long put off project of cleaning out the room that held all of her photo albums and memorabilia. It had proven to be more emotionally taxing than she’d anticipated, and on several recent nights, she found herself waist deep in bittersweet memories, moving between laughter and tears. Angelica had hoped being in her fifties would mean a slower pace of life and more time for her own hobbies and interests, but instead, things seemed more hectic and stressful than ever. She finger-combed her hair into place as she entered the room and greeted the rest of the group as she took a seat.

Buy When Heart’s Collide On Amazon