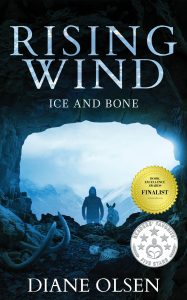 As the story of Ice and Bone of the Rising Wind series opens, paleontologist Dr. Secora James is still reeling from injuries sustained in the previous summer’s mountain top battle, and the adoption of Monta, an Andean orphan. Her best friend, Gideon Yellow Thunder has something important to discuss, but before she can listen, Secora receives a desperate call from a fellow paleontologist, Billy Riggins, who is under attack at a mammoth site in Western Washington. Secora travels from Montana, with her baby Monta to find out if Billy is dead. Will her growing knowledge of his taboo discovery and the accumulation of indisputable proof also threaten her life and that of her tiny daughter?

Where is the skeleton?
Gideon, shaken by the realization Secora will always be rushing away from him, Gideon leaves town to help a client solve a mystery in remote Western Montana. There he meets Kamal, the owner’s son, and caretaker, Jake Landsing. The three men are attacked by a dead-eyed assassin who wounds Kamal, then seals them inside a cold wet mine.

Jimmy Lizardeye, a Lakota Wichasha Wakan, as well as Gideon’s close friend and mentor, asks Secora to meet him near West Glacier. Jimmy is worried; he is unable to reach Gideon by phone or in spirit. If he and Secora can track the victims down, but will any of them rebound from the cave-in and hypothermia? A few days later Secora hears from the university’s Anthropology department; her sister, Iris, and good friend Jane have disappeared with their team of students into the Peruvian Yungas.

She must leave for South America with Jimmy and a university-sponsored team, including two treacherous companions. What about little Monta? Secora’s parents are away traveling and teaching, the babysitter can’t handle an extra child for an entire week, and she can’t leave the baby with a stranger.

They must embark on another dangerous journey together.
Can Secora survive?
Will her baby be safe?
Her circle of family and friends is critically important to her, yet they’ve all seemingly disappeared in a matter of days. Will she survive personal tests, assassins, and terror birds? Can she manage the loss of those closest to her?

As the thrilling adventures and events cause spiritual bonds to strengthen, Secora can feel them throughout her spiritually, and her culturally diverse extended family, knowing everyone is spiritually connected as one as our creator intended…