You are here: Home / Christian Books / I Am Persuaded by Jonathan Brenneman 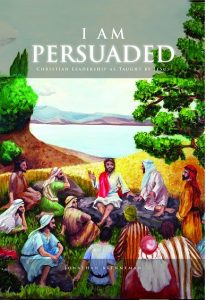 “Jonathan Brenneman in his ‘I Am Persuaded’ provokes, jabs and challenges our sacred cows of church leadership. Yet, the jabs are not hurtful because they come from Scripture. This is not a reactionary book filled with leader bashing but a graceful and excellent presentation of mostly forgotten principles concerning how Jesus and the early church taught and practiced leadership.

All the key and at times controversial words are discussed: rule, obey, submission, apostles, authority, and spiritual covering. Excellent exegesis on these words is provided and is foundational to the author’s conclusions. If you find yourself disagreeing, then, by all means, do a better exegesis. I think that will be difficult. Jonathan Brenneman has personally made a paradigm shift in his life and shares it with us. Will you?”

What Inspired You to Write Your Book?
I was having online discussions with several people who had an authoritarian/hierarchical view of church leadership. I pointed out many flaws in translation due to hierarchical bias, such as the verb translated nearly everywhere else as "to serve" suddenly becoming "to exercise the office of a deacon."

I soon got private messages imploring me to write a book to clear up the confusion about authority in the church. I finally accepted the challenge.

How Did You Come up With Your Characters?
Nonfiction

Hebrews 13:17
Obey them that have the rule over (hegeomai) you, and submit yourselves: for they watch for your souls, as they that must give account, that they may do it with joy, and not with grief: for that is unprofitable for you.

Ok, so even though “them that have the rule over you” is really better translated as “those who are esteemed among you,” what about the word obey? The English word "to obey" implies that the one who is being obeyed has authority to command. But if it is so, then why didn't Jesus obey when the elders of his day wanted people to come on the weekdays to be healed, and not the Sabbath? Why didn't the apostles in the book of Acts obey when they were commanded to no longer preach in the name of Jesus?

Galations 5:7-8
Ye did run well; who did hinder you that ye should not obey the truth? This persuasion cometh not of him that calleth you.

The noun "persuasion" in Galatians verse 8 is "peismone" (yielding to persuasion, assent) and is derived from the verb "peitho," which was translated as "obey" in verse 7. So although the meaning of the word "peitho" is something similar to the meaning of "to obey," it does not have the same authoritarian tone. W.E. Vine confirms this meaning: “to persuade, to win over, in the Passive and Middle Voices, to be persuaded, to listen to, to obey, is so used with this meaning, in the Middle Voice… The obedience suggested is not by submission to authority, but resulting from persuasion.”

This word "peitho" is only translated a few times as "obey," but it is often translated as "trust,” "confidence,” or "persuade." Of the fifty-five times that I found it in the New Testament, the KJV only translates it as "obey" or "obeyed" seven times. It is used many times in the context of describing how the apostle Paul spoke to both believers and unbelievers…

Buy I Am Persuaded On Amazon