You are here: Home / Romance / One Monday Prayer by T.K. Chapin 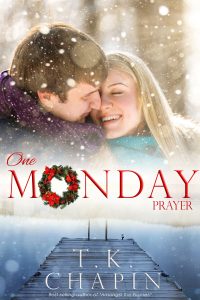 Two years after losing her husband, Angela’s apartment suffers a fire and forces her out. Taking up her cousin Serenah’s offer to visit Eastern Washington for the Holidays, she looks forward to a white Christmas while repairs are being completed back home. On the plane ride to Spokane she is confronted head on with a fear that shakes her to the core. Through the comfort of a thoughtful prayer with a stranger, Angela finds peace. Could she ever see the mysterious man again? Or are some things never meant to be? From the best-selling Inspirational Christian Romance Author T.K. Chapin comes a Christian Christmas story of faith, hope and love that will keep your fingers turning the page to see what happens next. One Monday Prayer is book five in the Diamond Lake Series by T.K. Chapin.

What Inspired You to Write Your Book?
I wrote this book to help people that are going through difficulties in their life. Oftentimes it’s not until we stop trying that God can truly begin to work in our lives. The story centers on a widow that visits her cousin (Serenah) for the Holidays. Through a near death experience she finds comfort in a prayer of a stranger. The truth this story draws on is one near to my heart, that’s God is always working behind the scenes. It also touches on healing after loss. My hope for this story is that it blesses you as much as it did me writing it.

How Did You Come up With Your Characters?
All the characters in my books are based off of people I know or have met in my life. Angela is based off of a girl I used to know in youth group growing up, she has been through a lot in life and deserves some love and happiness.

Buy One Monday Prayer On Amazon