You are here: Home / Fiction / One Night in Tehran: A Titus Ray Thriller by Luana Ehrlich 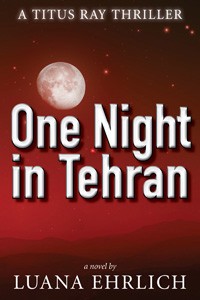 How Did You Come up With Your Characters?
I have been an avid reader of spy thrillers since I was eleven years old, and I’ve met all kinds of protagonists in this genre. I’ve also been a Christian for as many years, and I’ve worked with new believers for the past twenty-five years. Thus, my protagonist, is a covert intelligence officer who has become a new believer and, while struggling to survive in his shadowy world of deception and lying, must learn to live out the Christian life.

Book Sample
In far northwest Iran, a few minutes after clearing the city limits of Tabriz, Rahim maneuvered his vehicle onto a rutted side road. When he popped opened the trunk of the car to let me out, I saw the car was hidden from the main highway by a small grove of trees.

In spite of our seclusion, Rahim said he was still anxious about being seen by a military convoy from the nearby Tabriz missile base.

For the first time in several hours, I uncurled from my fetal position and climbed out of the vehicle, grateful to breathe some fresh air and feel the sunshine on my face.

As my feet landed on the rocky terrain, Rahim handed me a black wooden cane. I wanted to wave it off, but, regrettably, I still needed some help getting around on my bum leg.

Rahim slammed the trunk lid down hard. “You can stretch for a few minutes,” he said, “but then we must get back on the road immediately. Our timing must be perfect at the border.”

Rahim and I were headed for the Iranian/Turkish border, specifically the border crossing at Bazargan, Iran. He was absolutely confident he could get me out of Iran without any problems.

However, during the last twenty years, I’d had a couple of incidents at other border crossings—Pakistan and Syria to be precise—so I wasn’t as optimistic.

While Rahim was tinkering with the car’s engine, I exercised my legs and worked out the stiffness in my arms. As usual, I was running through several “what ifs” in my mind.

What if the border guards searched the trunk? What if the car broke down? What if we were driving right into a trap?

Buy One Night in Tehran: A Titus Ray Thriller On Amazon