You are here: Home / Romance / One Tuesday Lunch by T.K. Chapin 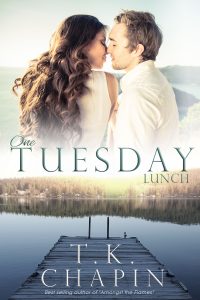 With a dead-end job in a small town, Miley finds herself bored and longing for change. When it comes in the form of a gorgeous stranger, she’s pleasantly surprised until he’s arrested for murder. Could her long awaited love be a murderer? Or are things not what they appear. Find out in the latest installment of the Diamond Lake Series by T.K. Chapin. From the best-selling Inspirational Christian Romance Author comes a story that will keep you turning the pages in anticipation of what happens next. One Tuesday Lunch is book six in the Diamond Lake Series by T.K. Chapin.

What Inspired You to Write Your Book?
I wrote this book to help people who are going through what feels like an impossible situation. Sometimes, we feel as if the whole world is against us and we want so badly to control things, but oftentimes, while we are busy trying our own way, God is working behind the scenes elsewhere. This story centers on a woman who helps a stranger. My hope for this story is that it blesses you as much as it did me while writing it.

How Did You Come up With Your Characters?
Every character in my book is based off of someone I know or have met in life. I like to add the good and the quirky personality traits I see so that readers can identify easier and draw closer to God along with the characters in my books.

23. Whatever you do, work at it with all your heart, as working for the Lord, not for human masters, 24. Since you know that you will receive an inheritance from the Lord as a reward. It is the Lord Christ you are serving.
Colossians 3:23-24

It was the exact passage I needed. Looking up from the page, I saw her still beaming with a smile through the pain of illness. Sick and unable to take care of her daily tasks around the inn, she still kept hold of her joy in the Lord. Her poise and level-headedness were admirable. “How do I do it, though?”
“It’s simply choosing to, Miley.” The fireplace popped, and she looked over. “We have a new set of choices every single day of our lives. We have to choose God, not people.”
Closing the Bible, I stood up and set it down on the coffee table. “In the heat of the moment, I can’t help but act emotionally and out of control. I don’t know how to stop it.”
“It starts with your inner life, Miley. Your soul. If you spend your time worrying or fretting or focusing on the bad things going on, you’re going to have more bad days than you wish.”
Shaking my head, I said, “But my circumstances—”
Serenah raised a hand. “Your circumstances change from day to day, moment to moment. You can’t let those superficial moments on the top level have an effect on the lower levels. Right? If Wendy freaks out and screams, you have a choice. Ignore it and focus on something good that’s going on. It’s not a perfect system because we are not perfect. We need God.”
Letting a bitter laugh escape my lips as I clung to ‘focus on something good,’ I shook my head. “Something good?”
“Yeah,” Serenah retorted. Her tone was becoming impatient. “You’re not dead, you have a car, you’re not hungry . . . you didn’t get beat up last night.” Surprised she would make a mention of her past, I raised an eyebrow. She shook her head. “Sorry. Just put God first and feed the good thoughts in your life. The rest will follow.”
“It makes sense.” Glancing over the couch and to the lake, I asked, “How have your numbers for the inn been going?”
Shrugging, she snuggled back under her blanket, lying prone as Charlie came in with a damp washcloth. He placed it on her forehead. She looked at me. “It’s been a hard winter. Fewer guests.”
Charlie added, “Yep. Jody always had rougher winters. The good season helps float the off-season. Luckily at the will reading we found out we inherited the diner also, so that helps float us.”
“Well, that’s good at least,” I replied. Pulling out my phone from my pocket, I saw I was running late for my hair appointment with Chantelle at Sally’s Beauty Salon in Newport. “I have to get going. Thanks for the chat, Serenah. You always know what to say.” Going over to her, I bent down and gave her a hug.
“Anytime, gal.”
Releasing from our embrace, I said, “Thank you for everything.”
“Hey, don’t forget that we have that Feed the Hungry thing in three days.”
“I know. The tenth, right?”
She nodded. Feed the Hungry was a group that our Sunday school class from Newport Christ Community agreed to help out within the city. Serenah and I decided to go along with a few others on the tenth of January in the early morning—five, to be exact. As I left the inn, I thought about how she had already emailed me, texted me and posted a comment on my Facebook wall reminding me about being there at five on the tenth. It was annoying, but Serenah wanted to make sure it didn’t turn into last year’s event. Nobody showed but her out of the eight who agreed. It made sense why she was so obsessive with the reminders.

CHAPTER 2
Laying another order in the server window the next day, I waited for the cook, Eric, to come back over to the window. He was a kid fresh out of high school who couldn’t put together a meal to save his life. Always fumbling around the kitchen and sweat pouring off his forehead, he was a poor replacement for Diego who left for more pay and opportunity at his second job at the automotive store. Wendy, though, in all her stupidity, wanted to pay someone on the cheap, and the high school dropout pot smoker was her ticket to lower labor costs. My suspicions about her disdain toward Diego because of his bloated salary were confirmed when she picked up this Eric kid.
“That salad was dry,” I said as he finally arrived over to the window. My eyes fell to the salad I set down in the window.
“What? That doesn’t even make any sense.”
Shrugging, I said, “Table three said it, not me. I asked what they meant, and they said the ranch to salad ratio wasn’t enough to even coat all the lettuce.”
He clenched his jaw. He looked like he was one bad comment away from throwing his hands up and walking out. Through his teeth, he said, “Okay. I’ll remake it.”
Leaving the window, I went back out to my table I knew needed topping off on drinks. Arriving at the table, I asked how the food tasted and took cups for refills. Mouths full, the husband and wife nodded with big smiles, and I left over to the server station to begin refills. Wendy walked over.
“When is your lunch?” she asked. Her tone made my thoughts drift negative, but I pulled them back to a happy place like Serenah told me. I have a job. That’s good, I told myself.
“It’s here in ten minutes. How come?” Setting a drink to the side, I brought the next cup up and filled it. Please don’t make me take more food to that guy.
“I need you to take an order to that house again.”
My heart pounded. “What? Why? That guy was crazy!”
She narrowed her look at me but then nodded. The nod was the kindest gesture I’d seen in months. Clearing her throat, she adjusted her footing. “I meant to call him and let him know that the meals that Don Atkins set up for him would start that day. My bad. Anyway, he knows now, I guess. His name is Hunter. He’s a Marine who lost a leg over in Afghanistan and now is living in his dead uncle’s house. Just be nice. Please? Don is paying double just to have it delivered. The money is nice.”
Sure, I thought. Be friendly to the good looking man that gave me a look like he wanted to strangle me on the spot when I was only trying to bring him some food. Go back to the same house and knock again so maybe then he could pull a gun on me? The verses pressed against my mind. I woke up today, that’s good. Clearing my throat, I asked, “How is this safe for an employee? I was fearful.”
Wendy smirked. “He didn’t expect you. It’ll be fine, Miley.”

Buy One Tuesday Lunch On Amazon