You are here: Home / Archives for Patricia Azeltine 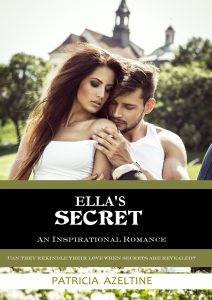 Ella Carmichael needs a job and a roof over her kid’s heads. But to apply at Parker’s Candy Factory, owned by Jason Parker, her ex-fiance, is crazy. She learns at the interview the position was taken and runs into Jason. Sparks ignite between them as if they hadn’t been separated for six years. With nothing available at the factory, he offers her a job as a housekeeper at the Parker Mansion, a live-in position. How wise is it to bring her twins to live there when Jason is their father but doesn’t know it? And then, there’s his mother, who broke them up, nearly killing Ella in the process. Desperate, she accepts the position.
Jason wants children desperately to carry on the Parker fortune. But that dream is long gone after his car accident left him sterile. Since then, he’s lived a savory life full of one-night-stands and bad choices, causing chaos in his life.
When Ella learns of Jason’s past anger and resentment build. While she took care of his children, he went through women like underwear. She meant nothing to him! She longs for a husband and family.
Can Ella and Jason rekindle their love and become the family they always should have been? Will Ella’s secret about the twins destroy any chance they have? And then his mother returns?
She turns to the guidance of Reverend Foster. Will Ella and Jason find happiness with faith, hope, love, and forgiveness?